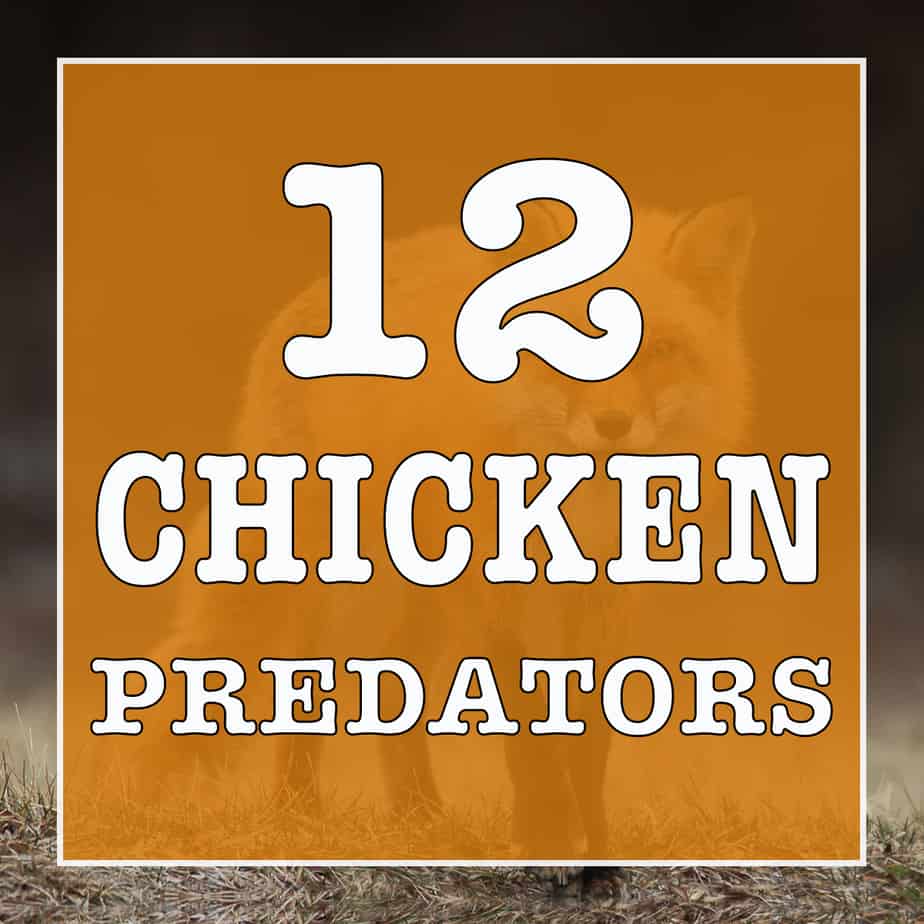 We all want our chickens to stay safe and have no losses. But, how exactly do you do that with predators around? You might not have any issues for years until one day, a predator moves into the area. Today we are going to talk about the 12 Chicken Predators And How To Protect Your Flock. We are going to learn not only how to identify them when you don’t see them, but also how to prevent them.

What Are Chicken Predators?

Chicken coop predators are any animal that will eat the chickens, chicks, or eggs in your chicken coop. Depending on where you live, there are a wide variety of predators. And no area is entirely free of them. So here are a few of the most common chicken coup predators and how to identify them.

Foxes are native throughout most of the USA. They are sneaky little creatures drawn to humans and anything left outside. Foxes are opportunistic hunters and will get into almost anything that you can imagine. These chicken coup predators attack early in the morning and late in the evening. They don’t stick around to eat their kill, so you might not find much evidence. Besides finding a little hole where they can get inside and a few feathers, seeing one is the only way to prove it.

Raccoons are another creature that lives almost everywhere in the US. They especially love areas where there are plenty of people and thrive in the suburbs all across the country. The most significant sign that a raccoon has gotten to your flock is that the bodies are left where killed and hardly eaten. Raccoons are notorious for killing as many chickens as they can and not eating too much of them. They will mostly eat their crops and nothing more.

Stray pets or even your neighbor’s loose animals are the biggest chicken predators during the day. Most people never think about a dog coming into their yard or a cat that has hopped a fence. And yet they are sometimes the most gruesome of all the predators out there. In many cases, you will see a dog or hear it when they have gotten to your chickens. They will likely dig under the run or break the sides of the run altogether.

Cats are a little sneakier. They are least likely to take off with an entire chicken. But if you notice small holes and only chicks missing, a cat might be to blame.

These creatures are likely to be in every suburb in the country. They are sneaky and efficient when they hunt. The skunk’s easiest give away is their smell. But skunks and possums have similar hunting techniques. Both will eat just about anything they can get their hands on. They will dig under or climb into a coop in the early morning and late-night hours. Both are likely to take off with eggs or baby chicks, but not full-grown chickens. These 12 top recognized chicken predators will eat adult chickens where they killed them, but not finish the whole thing.

Larger owls such as the Great Horned Owl are the most common types to go after adult chickens. On occasion, a Screech Owl or Barn Owl might go after baby chicks since they are smaller, but not often. Owls scoop up their prey during the night and don’t leave any sign of them. Hawks, on the other hand, are chicken coop predators during the day. They will try to pick up chickens during the day but are not always successful. If you find chickens with bloodied bodies, it was likely a hawk.

Bobcats, mountain lions, and cougars all come after chickens when the opportunity arises. You will likely find a part of the coop that was pushed in or broken to get to them. These predators also don’t eat where they have killed. You are likely to find a lot of blood, feathers, and paw prints of most wild cats.

Weasels are common in some areas of the US and can be a pain to get rid of. They can climb, dig, squeeze, and break locks to get into a chicken coop. Some signs of a weasel attack are small bite wounds around the neck, and chickens in piles. Weasels are hoarders by nature and will try to hide their prey for later. They also love chicken eggs and baby chicks the most.

Badgers are incredible diggers. If they are to get to your chickens, it is likely noticeable because they will dig under fences and through the bottom of your chicken coop. They will carry off chickens are chicks alike with almost no signs except for a little blood and feathers.

Coyotes and Wolves are some of the 12 top recognized chicken predators. They are known for hunting either alone or in packs. Both of these creatures are extremely intelligent and likely to remember your daily routine. They will wait to attack when you are not paying attention or away from home. This means that these two are chicken predators during the day and night. They never eat their prey where they have killed, so you likely won’t find a body.

Now, Bears are another common predator that is becoming more and more of a problem. Bears can get into almost anything. They can easily break through wire, wood, and every other barrier you could put up. You will know when a bear gets into your coop because no other chicken coop predator can cause that kind of damage.

Another widespread predator is the snake. Some snakes love to prey on chicks and your eggs, while others are more interested in rodents that hang around coops. In either case, they can be hard to spot. You might notice a few eggs missing here and there, or something a little more obvious. Sometimes snakes can pick off chicks or attempt an ambitious meal of an adult chicken.

And finally, we come to an unlikely predator, the rat. Rats are attracted to your chicken food and water, and once they find a good thing, they keep coming around. Occasionally they will run off with an egg or two, but the real danger comes when snakes are attracted to them. You might find rat droppings or little holes that the rats come and go from.

Now that we know what predators to look out for, we can talk about how to deter them. Some of these animals are hard to keep away, but hopefully, with a few of these tips, you can keep your chickens safe.

The first thing you will want to do for a chicken coop to keep predators out is to check for holes. Anything that is over an inch wide should be covered with hardware cloth.

One surprising way to keep predators away is to install motion-activated floodlights. Lights coming on suddenly can scare some animals from coming any closer to your coop. These can work for animals not used to the suburbs and human interaction.

Raccoons can surprisingly get into almost anything. You will want to get special latches installed on your chicken feed, coops, and anywhere with a door or window.

A great way to keep predators away is to keep your coop and yard clean. All food should be kept in airtight containers and not left out all night. You should also dump water every night to keep animals from being drawn to it. You will need to keep your yard mowed, bushes trimmed, and no piles of brush. But it doesn’t end there. You will also need to make sure all compost is secured, and trash is not easily accessible.

If you want to deter predators naturally, the best way to do it is with herbs. Planting strongly scented like lemongrass and marigolds can keep some animals away. They can also be useful in hiding the smell from your chicken coop so that predators don’t immediately notice them. Using herbs and plants should not be your only means of protection.

The most efficient way to keep a chicken coop safe from predators is to bury hardware cloth. If an animal tries to burrow their way into your coop or run and gets to the hardware cloth, they immediately stop. Animals don’t like the way the hardware cloth feels on their nails and might try a different area. But after they try a few areas and get the same results, they give up quickly.

Much like floodlights, having motion activated sprinklers could deter most predators. No one likes being sprayed unexpectedly. So this can be a very effective way to keep most predators away from your chickens.

What Killed My Chickens?

So, Do You Have Predators?

At some point, all of us run into predator problems. But with this list of the 12 top recognized chicken predators, you can identify the issues and take care of them. With a few tricks, you can keep almost any predator out, and your chickens will be safe.

How to Vacation When Chickens Don’t!

How to Vacation When Chickens Don’t!