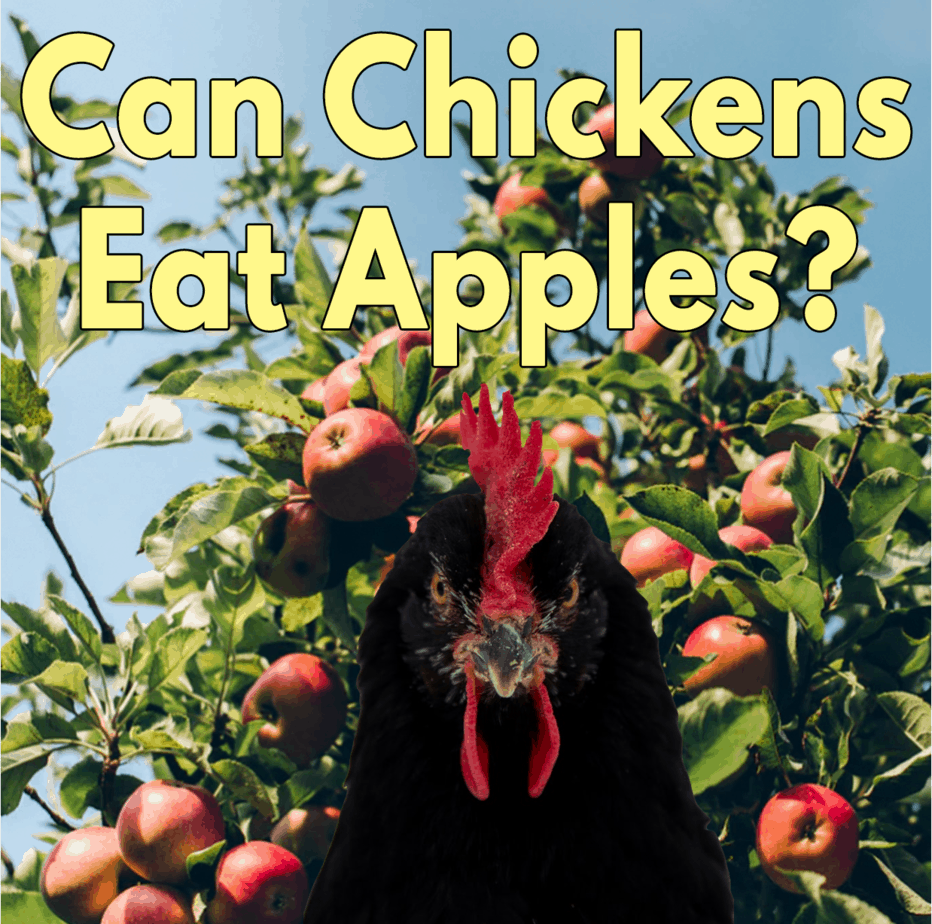 So, the question is: Can Chickens Eat Apples? This is a look into chickens and apples; no, this is not a recipe! This post is about a controversial topic among nutritionists and animal experts of whether to feed chickens apples. Many questions arise as is the fruit safe for them to digest. It is common sense that for most human beings, an apple is one of the healthiest foods most individuals can consume.

Although the fruit is safe for humans, chickens and other animals do not have the same digestive system as humans. Animals, in general, cannot digest every type of food that humans can. Just like humans, not all types of chickens can process the same foods. The following will provide insight into chickens, apples, and feed the apples to the chickens.

A Little About Chickens

Also, their bodies give some of the most versatile meat; most of their bodies can be used or eaten. If you raise chickens, you want to make sure that you give them the best possible source of food.

The food chickens digest strengthens their bodies, but overall delivers the proper nutrients to human beings when they digest the chicken’s eggs and meat.

As a necessity, as adequate nutrition is, making sure you feed your chickens the safest foods for their digestive system is just as important. We do not want to harm the chickens in any way possible that may result in sickness or, unfortunately, death.

Many foods that humans eat can be harmful to your pets; the same goes for chickens as well as your dogs and cats. You may not know this, but chickens do not have teeth, which makes people wonder how they chew their food; it is natural for humans to think they would choke if they ate certain foods. However, their digestive system is one of the highly resourceful methods known among animals.

Not all chickens are the same; in fact, certain breeds of chicken cannot digest particular food, or they may be allergic to the feed. It just depends on the type of chickens.

Some foods you may want to avoid giving your chickens are sugar, raw eggs, raw meat, avocados, and junk food. These foods have been proven to be harmful and possibly kill the poor animals.

A Little About Apples

The apple is possibly the most popular fruit on the planet. Let us refer back in time; They are in the Bible. Apples contain many essential nutrients the human body needs consuming.

One little apple has fiber, potassium, antioxidants, vitamins that all help with preventing certain diseases. This knowledge is where “An Apple a day keeps the doctor away,” saying originated from.

When researching about apples, there are mixed theories and viewpoints about the whole apple. Few individuals claim that the saying is simply not true. Some believe the saying is true, while others claim you must eat the entire apple, including the seeds, to keep the doctor away.

Several of the diseases that apples have thought to prevent or help reverse is dementia, strokes, lowering cholesterol, keep your heart healthy, diabetes, cancer, and obesity.

Many individuals throw out their scraps to their pets and animals. Naturally, most humans think it is safe for animals to eat; we know that is not always true.

A lot of individuals eat apples then throw the core on the ground so the chickens can eat them too, but is that safe for chickens to eat? Well, although many experts have mixed reviews about apples.

For the most part, the fruit is safe for the chickens to eat. The fruit itself will not become harmful to the chicken according to most experts, but still, the topic has a mix of viewpoints, however, just like humans, chickens like treats. So apples are seen as a tasty treat for them to eat. So, it is OK to feed the chickens apples.

Another reason Apple is an excellent pick to feed the chickens is it is one the cheapest pieces of produce one can purchase. Also, if you own chickens, there’s a good chance you may already have an apple tree or an apple orchard on your property. In that case, there is no additional cost.

If you don’t own apple trees, you may go apple picking in the fall somewhere else and get plenty to feed your chickens. Lots of chickens enjoy apples. Some chicken farmers say they haven’t seen their chicken turned down an apple, so it’s a food that most chickens enjoy eating

One thing you would like to avoid when feeding a chicken an apple is to make sure not to give them whole an entire whole apple; it’s too much for them. Chickens do overeat.

The best way to serve your chickens with apples is to make sure your apples are dry if you can; the least amount of moisture helps chickens digest their food easier that’s why they eat feed.

Another important thing is making sure the apples given to them do not contain any mold. Mold can hurt and can make the chickens ill just like it does with human beings. If you can, the best approach feeding chickens apples would be to make sure you don’t get the very sweet apples and also the least acidic apples.

If you’re looking for apples to give the chickens a couple of the good ones would be cox and gala. Another reminder, please don’t forget to remove the apple seeds.

A Little About Apple Seeds

The seeds, the area of Apple, that many humans and animals have a problem eating because it contains cyanide. Although the seeds contain a tiny portion of cyanide, many experts claim that it should be not offered to your chickens altogether because cyanide can build up in the body and kill the individual; the same goes for chickens.

The theory of cyanide in apple seeds is very diverse mainstream information suggests seeds are dangerous for anyone to consume. Other experts claim. The seeds contain a vitamin called vitamin B17 that can cure cancer.

It has been very debatable over the years experts believe vitamin B17 is a myth, but the experts that believe in vitamin B17 recommend eating the seeds. However, it is the safest to avoid the seed because cyanide can kill human beings and animals because it stops the oxygen from getting to the cells.

A Little About Apple Skins

The apple skins are one of the best nutrients; the peelings contain phytonutrients that help fight cancer. It doesn’t matter if you remove or leave the skin on for your chickens. An apple can lose the cancer-fighting benefits when the skin is peeled from the apple, especially if you are going to eat it yourself.

However, there is an issue with the skin; if it is not organic, and the apple sprayed with pesticides. The pesticides are harmful to humans as well as animals. The skins are primarily safe for the chickens also. If possible, to be on the safe side, make sure it is organic apple.

Hopefully, this post has given you some insight into the topic and has been informative. Overall, it is safe to feed your chickens apples, but remember to remove the seeds.

Also, to be on the safe side when feeding the chickens, you want to feed them the suggested ways to remember it may take more time and cost more money than you thought. But if you do have the time and the money to invest in apples for your birds.

It is better if possible to use dried apples, which usually cost more. But remember you can make a food dehydrator or even in the oven and dry them yourself. This is not an easy way of feeding the chickens, but if you are concern about your chickens digesting the apples properly, those tips may come in handy for you.

In the long run, what your chickens eat will benefit you and your customers. After all, you will be the ones consuming the eggs and meat. So it is better to feed your chickens, the better nutrients now, and have better results for yourself later on.

I have found that it is OK to feed apple leftovers to your backyard chickens. Stay away from feeding them the seeds because they contain harmful cyanide. Make sure that the apples have not spoiled. Rotten, moldy apples should never be fed to your chickens because they can cause illness and possibly premature death.