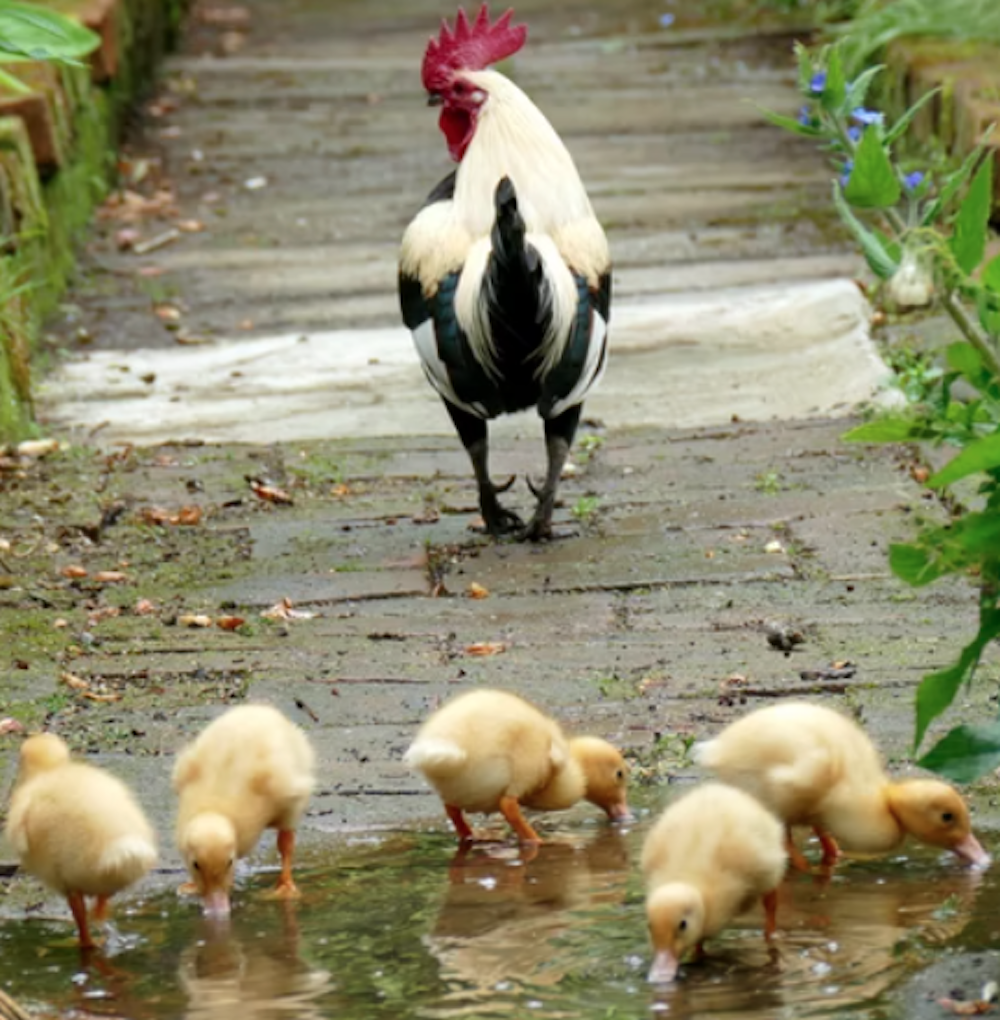 Nature can be unique sometimes and perform strange, miraculous tricks. Biologically, it may be possible for hybridization to occur between a chicken and a duck. Can ducks and chickens mate? The occurrence is rare. The result of such hybridization always gives unpredictable results.

A rooster can mate successfully mate with a duck. However, a drake can not breed with a hen as it will hurt the hen. The sex organ of a drake is external, and hens are made so that they can not accommodate an external sex organ.

In cases where a successful cross-breed of a duck and chicken occurs, it will be sterile. Besides, the eggs will be inedible.

There have been several cases of roosters mating with ducks. The sperm of the rooster, however, does not make it to the duck. Generally, roosters are more gentle during mating as compared to drakes. It is therefore impossible for a rooster to harm a drake when making.

In some rare cases, drakes may mate with hens. However, this should not be allowed because of the following reasons:

Drakes have an external sex organ

The sex organ is a crucial feature that shows why a drake should not be allowed to mate with a hen. A drake has an external penis used to penetrate his female counterpart and deposit semen at the deepest end for the fertilization of eggs.

Chicken hens are not supposed to be penetrated. If a drake penetrates her, it can easily harm her and even cause a common issue known as vent prolapse. If the prolapse is left untreated, it can easily lead to the death of the hen.

The sex organ of the drake can also damage the hen’s internal organs and lead to bleeding and the introduction of bacteria.

Drakes are more violent during mating.

Drakes are more violent when mating as compared to roosters. A hen that mates with a duck will often suffer from various injuries such as torn skin and bleeding at the neck. The drake may even break the neck of the hen. Drakes are sometimes referred to as ‘wife beaters’ because of how rough they treat their mates.

The sex drive of drakes is very active.

Generally, drakes have a very active sex drive. One drake can mate with dozens of duck hens in the early summer or in the spring. If there are few duck hens to mate with, a drake can as well injure the existing ducks.

If he can over mate and even cause injuries to a duck hen, then the results on a chicken hen can be even much worse. The hen may survive a few mating attempts but will not survive repeated attempts from the drake.

The physical size of the drake

Physically, ducks are larger than chickens. It is therefore not possible for a drake to comfortably on the top of a hen. If this occurs, the chicken hen may get serious injuries and even die eventually.

The unique shape of the penis and vagina in both the female and male ducks make it very easy for them to mate.

Backyard ducks mostly mate in water. They can also mate on land. Mating in water reduces the chances of the female getting hurt.

If you have ever watched a drake keenly near a duck hen just before mating, you should have noticed some behaviors.

Ducks swim very quickly at a short distance with necks held high. Before mating, a female duck will show an interest in a drake by nod swimming. Males will do the same immediately after mating.

Both drakes and female ducks bob the head rhythmically. This is then followed by mating.

In a grunt whistle, the male duck usually gives a remarkable whistle. He does this with his head raised above the water. It is most common in a large group of male ducks, and it is done to show off for the females.

The head-up tail-up is a quick gesture by male ducks. It involves showing off the blue and purple secondaries by raising the wing and tail to impress the duck hens.

Generally, roosters are always thinking of mating most of the time. This is the main reason why experts recommend that chicken keepers must be having at least five hens in a flock.

Courtship behaviors in chickens are mostly realized in the springtime. At that time, a rooster will become more attentive hens in a flock. Roosters have a ritualistic movement that they are known to court a hen with. They dance in circles around the hen while their wings are dropped.

If a hen is interested, she will comfortably lower her back. The rooster will, at that point, mount her while trying to balance at the same time. That is the reason why you are more likely to see most hens missing some feathers on their back.

Are duck and chicken eggs the same

The structure of duck eggs and chicken eggs is almost the same. Besides, the manner in which chicken hens and duck hens produce and lay eggs is the same. The process happens through various steps.

In terms of nutrition, duck eggs generally have a higher nutrition value as compared to the chicken egg.

Keeping ducks and chickens together

Have you been asking yourself if it is possible to rear chicken and ducks together? Yes, it is possible, and it can be carried out with ease.

Many urban gardeners, as well as farmers, have successfully raised chickens and ducks together. For your flock to be productive and happy at the same time, you will need to have some knowledge about how both birds want their habitat to be. –

What may cause ducks and chickens to fight

It is very rare for hens and female ducks in a flock to fight. However, it is a different story when it comes to drakes and roosters. Most farmers may avoid keeping them together because of the fighting.

There are various reasons why ducks and chicken may fight in a flock.

Overcrowding causes bullying in a flock by making the birds irritable. A fight is more likely to break out where there is not enough food and space.

Your coop should be designed in a way that all the birds are are able to eat simultaneously.

Fight over the female birds.

In most cases, drakes fight with roosters in a competition for roosters. If you raise the two without enough female counterparts, there will be high chances of fights which may even result in the death of birds.

You must make sure that there is a good ratio of male-to-female in your flock. The number of hens must always be more than the number of male birds. This will ensure that the male birds are always busy with the female thus, the birds will peacefully leave together.

Birds are always looking for food throughout the day. If there is no food, there are high chances of them becoming aggressive. This can eventually lead to fights in the flock.

Introducing ducks and chickens together for the first time will easily cause aggression. It is always advisable to introduce them together while they are still young.

Ducks and chickens can live and coexist together. It is a common behaviour for a rooster to mate with a female duck. Drakes may also want to mate with chicken hens.

This has to be stopped in every possible way as it can easily harm the hen and even lead to death. There is no scientific record that shows a cross-breed of a duck and a chicken.

How To Raise Ducks In Your Backyard

How To Raise Ducks In Your Backyard