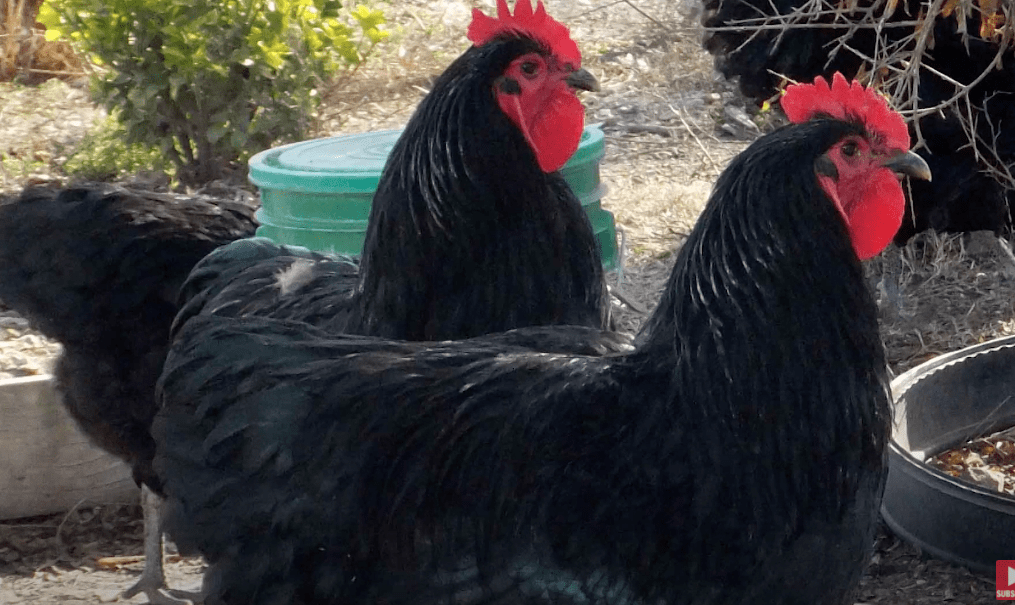 It is arguably the largest chicken breed in the USA and the entire world. Only the Brahmas can come close to them in terms of height. In this article, we are going to learn how this breed came to be and the good things that it offers to the bird keepers as well as the admirers.

The Jersey Giant breed was originally created in the 1870s in New Jersey by two brothers, Thomas and John Black. It was developed to fill the marketing niche and as a replacement for turkeys. At that time, the demand for big and heavy birds was very high. People at that time had large families. Therefore, they needed larger birds that could feed the whole family.

The breed was created from crosses of dark Brahmas, Black Langshan, and black Java. There is no evidence showing the addition of another breed.

Originally, they were named ‘Giants’. They were then named Black Giants at the beginning of the new century to honor the Black brothers. The name Jersey Black Giants came in 1917 as an honor to the state in which it was created.

Little attention was paid to the color of the birds at the beginning. This led to a range of colors in the feathering. However, some breeders had to work to ensure that the breed was standardized in conformation and color. The work paid off as the breed was later accepted as a blackbird into the APA.

In 2001, The Livestock Conservancy listed them as a critically endangered breed. Today, they are still very rare in the United States of America. However, some backyard keepers are helping the Jersey Giants to regain their popularity.

The most eye-catching thing about the Jersey Giant breed is its overall size. Generally, the body of the bird is moderate to long and is both deep and wide.

The height of mature male birds is mostly between 22-26 inches. On the other hand, mature female birds may be between 16-20 inches.

The weight of a mature male bird is around 13-15 pounds, whereas a mature female bird can weigh around 11 pounds. Black varieties are heavier than the white varieties by a pound or slightly more.

The three varieties of the Jersey Giants have a variation in the color of their feathers and legs.

The White Jersey Giants have yellow soles and willow-colored shanks. Their beak is more yellowish while their feathers are white.

They have clean legs with four toes.

Blue Jersey Giants have dark shanks, which are nearly black. The color of their feathers is grayish-blue.

All three varieties of the Jersey Giant breed have yellow skin. They also have red combs and wattles. Depending on the coloring of their feathers, the beaks can either be black or pale yellow.

Personality and Temperament of Jersey Giants

When considering Jersey Giant chickens, they are generally gentle. In fact, one of the reasons why they are often sought after is because they are docile and friendly. Their personality has made many people keep them as pets. They will make amazing backyard birds for you.

Jersey Giant hens are good mothers if they decide to set. However, they often break eggs before they hatch because of their size. They may also accidentally step on chicks after hatching and kill them.

– Their eggs are brown in color

– They produce larger eggs than those produced by the average chicken

Studies by The Livestock Conservancy have shown that Jersey Giants lay larger eggs than other breeds that are large in size. Although they were initially bred for meat purposes, they can be considered to be slightly good layers.

On average, they can produce 2-4 eggs in a week and a total of 150-200 eggs in a year. The eggs are medium brown or light in color and larger than those of an average chicken.

Chicks may take longer to hatch because of the size of the eggs. Jersey Giant pullets may not easily reach the point of laying eggs until when they are six months old.

Since the hens can accidentally break the eggs because of their weight, it is recommendable to remove eggs immediately when they hatch.

Jersey Giants are not susceptible to a wide range of illnesses. However, the main potential health issue that they might encounter is leg injuries. These can occur when they jump or fly from a higher height. You can prevent this by placing perches closer to the ground.

The birds require more food as compared to other breeds. They can look for food on their own if they are left to roam. In addition, you must ensure that they are taken care of in case they get injured. Sustained injuries can easily lead to bumblefoot.

Jersey Giants are hardy birds. This is because of their overall vigorous health and robust structure. They do very well in cold climates.

They should be supplied with adequate minerals and vitamins. This will ensure that they reach their maximum growth potential. Vitamins and minerals can also help them grow strong bones, thus reducing leg injuries.

Jersey Giants will do very well if a feeding schedule is put in place. Allowing the birds to roam freely and look for food on their own can also do well.

Setting up the Coop

Jersey Giants are generally large birds. Therefore, they require a lot of free room. Each of the birds may need approximately 5-9 square feet of the coop space. If you are planning to keep a flock of them, then you must ensure that you are leaving room for expansion.

Since they are very tall in nature, you must ensure that you construct the coop in a way that they can easily fit in. You will have to ensure that the birds have a spacious headroom. It would be best if you kept in mind that some Jersey Giants can stand up to 28 inches tall. The ceiling of the coop should be put at least 2 feet above the heads of the birds.

If you are thinking of your hens rooting, you will also have to plan for space. Each chicken should be given a perching space of 16 or 17 inches. You must ensure that perches are placed lower on the floor. Alternatively, they can also have ramps that lead up to them.

Facts about the Jersey Giant breed

In general, the Jersey Giant is a breed that can be raised very easily. However. There are a number of things that need to be put into consideration when raising them. This includes height requirements, feed, and space. Considering these factors about the Jersey Giant chickens make sure that you do not incur any losses.

The breed is a good fit for those who have large families and wish to raise their own birds.

If you are planning to raise table birds in a few months, then the Jersey Giants are not a good fit for you. This is because the breed takes a long time to grow to maturity. However, the fruits are sweeter if you decide to wait for them to mature.

So, considering the Jersey Giant chickens is worth the effort and time that you will require when raising. You can consider giving it a try if you have the ability and space.