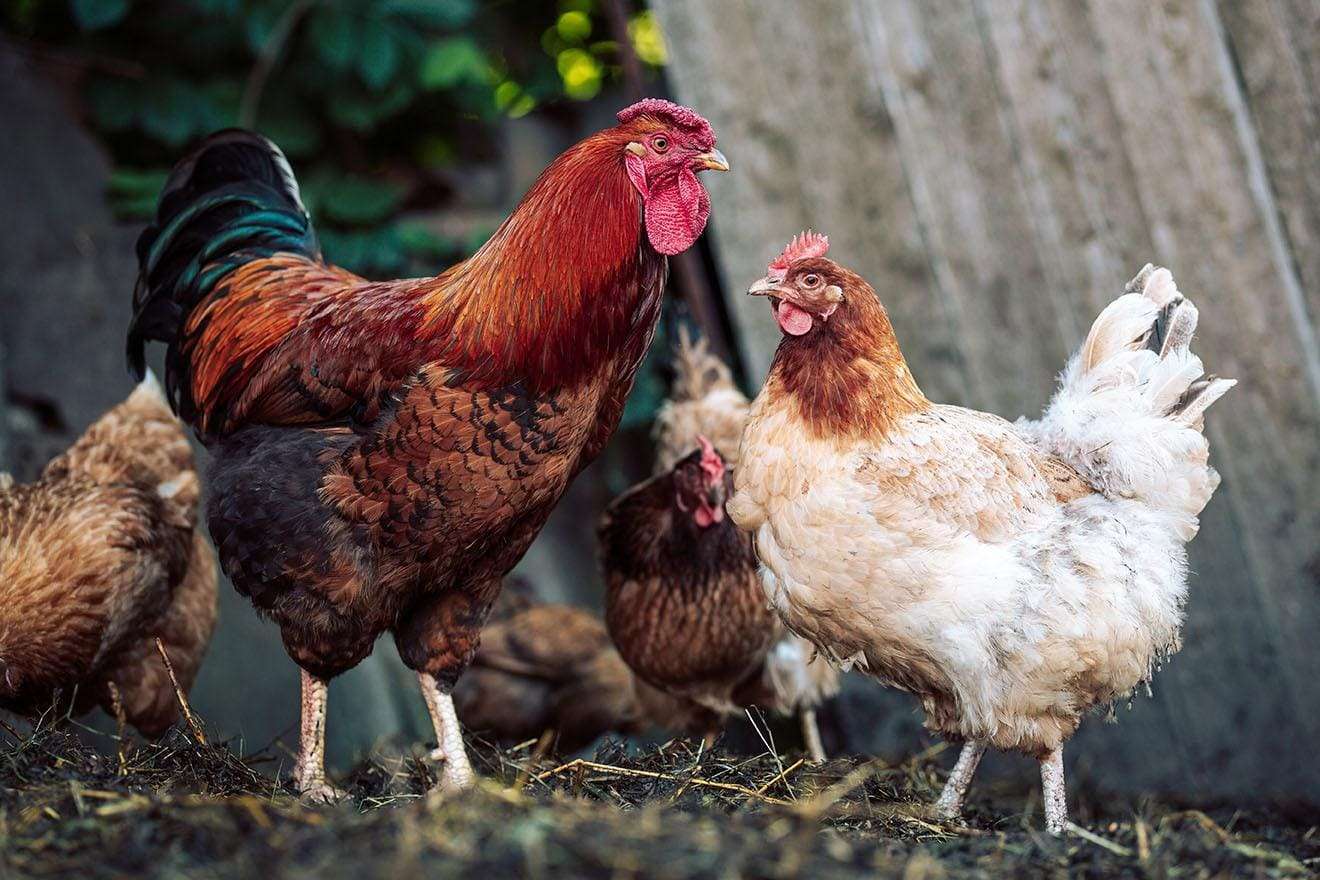 Knowing how to tell how old chickens are isn’t rocket science. But, it isn’t as straightforward as asking them to disclose their ages.

Ideally, when you get new chickens, you should try and get information about their age. Sometimes, though, it’s not always possible to get this information.

Still, there are various ways to tell how old a chicken is. You can usually tell by studying certain physical and behavioral features of the bird. Looking closely at the bird’s legs, feathers, wattle, comb, vent, and other characteristics will give you a good idea of how old the chicken is.

These indicators may not always be accurate. However, there isn’t any other way especially if you didn’t get the bird from a trusted breeder.

The Life Cycle of Chickens

Chickens usually live up to about 8 years. Some, nonetheless, go on till they’re 10 or 12 years old.

Within this period, there are four typical stages that chickens go through. They include;

This phase starts immediately when the hen lays the egg. It lasts for 21 days.

This phase begins soon after the egg hatches. It begins from the first day of hatching, lasting about 7 weeks.

Before chickens reach full maturity, they become teenagers first. Just like humans. This phase usually lasts from 7 to 16 weeks.

Chickens officially become adults upon sexual maturity. They’re usually between 18 and 24 weeks old at this stage.

How tTo Tell How Old Chickens Are: What To Look Out For

The aging processes of your chickens can be difficult to spot – even if you see them every day.

I’m therefore going to examine your chicken throughout its lifetime. More importantly, I’ll highlight key physical and behavioral changes that’ll give you a fair idea of the chicken’s age at each phase of development.

How to tell how old chickens are during the chick phase

In the chick phase, the age of the chicken is between a day old and 7 weeks old.

You can identify baby chickens without missing a beat. They’re small – cute, really. When they hatch out at first, they’re usually wet.

After drying out, they begin to sport a soft, fluffy coat. The coat is usually yellowish/golden. And you’ve probably seen it countless times. Some, though, come in black and other ranges of colors.

Around day 6 to 8, the baby chickens sport no feathers. So, if your chicken is tiny, all fluffy, and featherless, it is probably less than a week old.

Between 1 and 6 weeks old

At a week old, baby chickens begin growing feathers. The feathers usually start growing on the tail and the tips of the wings.

As chickens continue to grow, their fluffy coats gradually give way to feathers until their entire bodies are covered with them.

Therefore, at the age of week 6, chickens are fully feathered, no longer fluffy, and are about three times the size they were on day 1. If your chicken still has fluff, then it’s not more than 7 weeks old.

How to tell how old chickens are during the teenage phase

Enter the teenage phase of chickens! At this stage, chickens are usually between the ages of 7 and 16 weeks old.

Their growth rate during this phase is rapid. And you’ll notice that their fluffy coats have all disappeared. What’s more, their initial baby feathers will start giving way to adult plumage.

If the bird is between the ages of weeks 7 and 16, you’ll realize that they’re no longer as small and cute as they were when they were chicks. Yet, you’ll also notice that they aren’t big enough to be considered adults.

At this stage, they act clumsily. Their legs appear slender and long. And some may have patchy feathers.

It’s worth remembering that at this stage the sexual characteristics of chickens start becoming more visible. And you should have little to no issues trying to tell the difference between teenage male chickens (cockerels) and teenage female chickens (pullets).

That said, here are a few distinct features you’ll notice in either sex when they’re 7 to 16 weeks old.

At this stage, you’ll see that cockerels appear much bigger than their female counterparts. Their legs are a lot thicker. And their wattles and combs will look larger and redder than those of pullets of the same age.

During this period, cockerels begin acting dominant. On the other hand, pullets appear more meek and timid.

You’ll also notice that the feathers on the necks and backs of cockerels are more pointed. As for those on the pullets, they’re more rounded.

It is very unlikely to find pullets laying eggs during this phase of their lives. So, if the descriptions above fit your pullet. And she hasn’t started laying eggs, chances are that she’s not more than 16 weeks or 4 months old.

How to tell how old chickens are during the adult phase

During this period, chickens are no longer teenagers and are a lot bigger. Still, they have a little growing to do before they attain their full weights at about 1 year old.

You’ll see as well that the plumage of the chickens has fully developed. Also, by this time, you’ll notice how bright their wattles and combs look. The combs of the cock will be unmistakably erect and reddened.

You can determine if your chickens have reached this stage by observing their behavior. Male chickens in this phase are usually sexually active. You’ll often notice them trying to cross females.

At this time too, the pullet would have laid her very first egg(s). During this phase, eggs are rather small. And it’ll take just a little over 4 weeks before she starts laying eggs of the size we’ve all grown accustomed to.

Between ages 1 and 3 years

Chickens at the age of 1 year and beyond have attained full adulthood. They’ve reached their full sizes at this time.

They’re no longer slender. And you’ll be able to clearly tell the difference between roosters and hens. Roosters look imposing and stand upright most of the time. Hens, on the other hand, become more rounded. Combs and wattles become fuller and are more well-defined than at any other period.

Chickens tend to have their first full molt shortly after becoming a year old.

The process occurs both in roosters and hens. And it happens as summer begins fading into autumn. Old, dull feathers are shed off, giving way to new, glossy plumage.

During molting, you’ll notice the appearance of random bald spots on the birds. Your garden or coop will also be littered with so many feathers. More like the bursting of feather pillows all over the place. Their combs and wattles will also look dull. And their plumage will appear dry and shabby.

Between the ages of 1 and 3 years, chickens are in their prime. Roosters appear more dominant and protective of their flock. They’ll also spend much of their time chasing after and mating with the hens, fertilizing the eggs of up to 10 hens they mate with.

Hens at this point will start laying eggs with much regularity. And their eggs at this stage will look much bigger than those laid when they were around 18 to 24 weeks old.

From the age of 4 years onwards, chickens are past their prime.

At this stage, they’re old or are at least nearing old age. But, they don’t grow wrinkles or grey hair like we do. So, it’s not always straightforward knowing how to tell how old they are when they’re old. But, you can hazard a good guess by observing the behaviors of your chickens.

Roosters around this stage start to lose their vigor. They start crowing less. Plus, they start showing less interest in mating the hens. They may not even be able to fertilize the eggs of more than three hens during this period.

Whether rooster or hen, you’ll notice that the chickens in this phase are beginning to lose the vibrant colors of their combs and wattles. You’ll also see that the legs of the chicken have become darker and more scaly. Beaks at this stage also become longer and more slanted.

Chickens could go on till they die of old age around 8 or 10 years. Some, though, will not get to this stage. They’ll most likely succumb to some disease or accident along the way.

Just imagine completing your entire childhood in less than 3 months! That’s how fast chickens grow. And it’s probably what makes it challenging to accurately tell how old chickens are.

When they’re younger, especially when they have some amount of fluff left on them, you might be able to correctly guess their age. When they’re older though, it gets much more challenging doing so.

Still, there are several physical and behavioral characteristics you can observe as illustrated in this article. These should give you a pretty good guess about how old your chickens are at any given time.