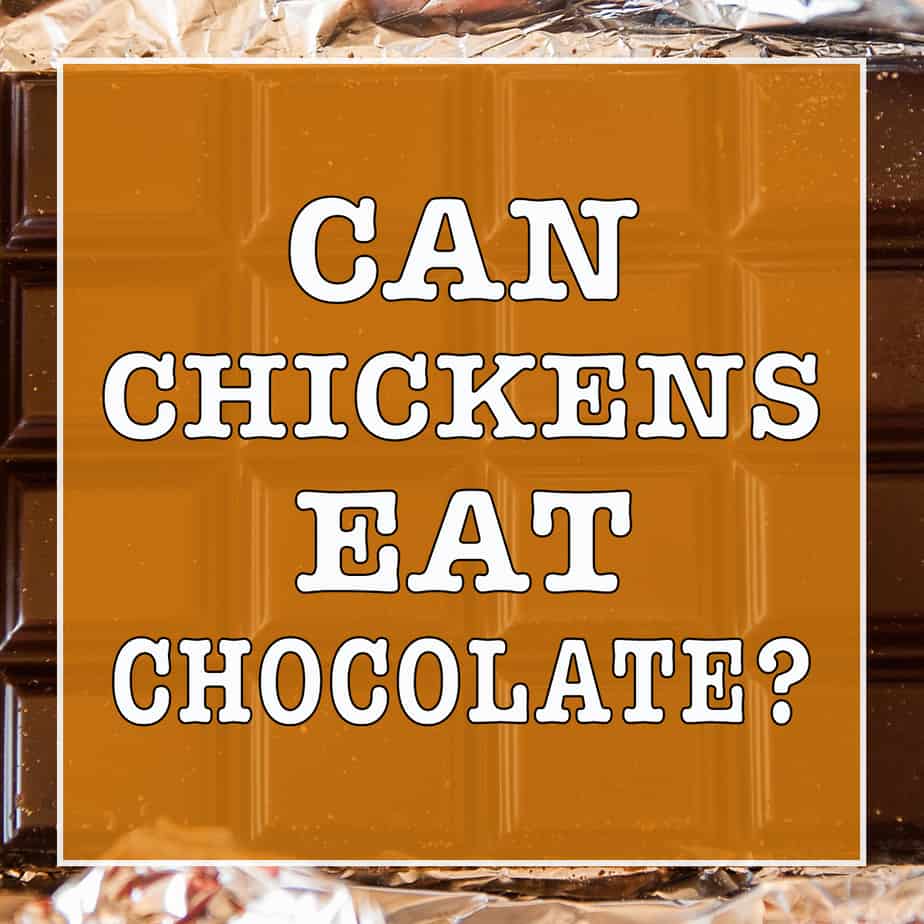 It’s tempting to give your chickens whatever leftovers you might have. After all, anything that is healthy for you is also beneficial for chickens. But what about treats? Can chickens eat leftover chocolate?

Chocolate isn’t exactly healthy, but it sure is delicious. Would chickens like to eat a small sweet treat? Let’s talk about this a little more to answer the question, Can chickens eat chocolate?

Chickens will eat anything you give them without much thought. Even if what you are giving them isn’t safe. So just because your hens seem to eat the chocolate doesn’t mean that they should.

Chocolate is unhealthy for your flock, even in small amounts. And it also happens to be on the list of most toxic foods that you can feed chickens. What makes chocolate so harmful is the high amounts of theobromine and caffeine. So your hens should never be exposed to chocolate to prevent injury.

If you were hoping that your chickens would appreciate a sweet treat, chocolate isn’t the way to go. In fact, chickens don’t have taste buds that can detect sugary things. They would much rather have a fun treat that is also savory.

What Happens When Chickens Eat Chocolate?

Before we talk about what happens to chickens who eat chocolate, we need to talk more about the toxic ingredients. Theobromine is a stimulant that can relax humans and stimulate the mind.

While it is beneficial to humans, it is also highly toxic to all pets. The other ingredient to be concerned about is caffeine that raises blood pressure. When you combine these two compounds, disaster strikes.

Chocolate can cause terrible side effects in your chickens. The most common side effects are irregular heartbeat or cardiac arrest caused by the caffeine and theobromine combination mentioned before. These effects suddenly come on with no warnings, and smaller hens show side effects more quickly than larger ones. If your chickens have a small amount of chocolate, you will need to keep them under watch for at least 24 hours.

But chocolate can cause lots of other issues. You might notice that your hens will have diarrhea after eating chocolate because caffeine is a natural diuretic. And if you see that your hens are making a vomiting motion, it could be crop impaction brought on by eating too much chocolate. Crop impaction won’t resolve itself and will need treatment before more issues arise. If impaction is not addressed, your hen could lose weight, and the crop will become infected.

Other symptoms of chocolate poisoning are seizures and kidney failure. Since chicken’s kidneys are not great at filtering poisons, it could also lead to blood poisoning. Not to mention if your hens have too much sugar, they will become overweight. In general, if hens eat too much chocolate, it will ultimately lead to death.

Baby chickens are at their most crucial point of development in the early months. Baby chicks do best when fed a high-quality diet that supports their rapid growth. Giving treats to young chicks fills them with empty calories that can stunt growth. On top of this, giving treats like chocolate could prove fatal to babies.

Chocolate has serious side effects in adults, and those effects can manifest quicker in chicks. Chocolate, even in the smallest amounts, can kill a baby chick within a few hours. The combination of increased heart rate and weak kidneys makes it impossible for a baby chick to recover.

Is There A Safe Type Chocolate?

We eat chocolate in so many forms that you might be wondering if one type of chocolate is safer than the rest. Most recipes use either dark, milk, or white chocolates, so that we will discuss them.

Dark chocolate is concentrated cocoa with higher amounts of theobromine than any other chocolate. Small amounts of dark chocolate can prove fatal for most hens, even if it is only once.

Most sweets use milk chocolate. It is sweet and versatile and likely the type of chocolate you have on hand. While small amounts of milk chocolate have less theobromine than dark, it is still dangerous. The amount of dairy and sugar used in milk chocolate can even cause all of the same symptoms.

What About Chocolate Treats?

But other chocolaty treats like brownies have a lot more cocoa powder in them than cake. Brownies could cause chocolate poisoning much faster than cake and are not good treats for chickens.

How Much Is Too Much?

Can chickens eat chocolate? Even just the tiniest amount? When should you start to worry? A toxic amount of chocolate for a chicken is hard to pinpoint. What might be okay for one chicken proves too much to handle for another? Between the size, breed, age, and overall health, there are too many variables to say.

And since there is no science to figure out the perfect amount of chocolate a chicken can have, it is better to stay away. Another thing to consider is that most things have different cocoa concentrations. It can be challenging to say that a certain amount of chocolate-flavored treats are safer than others.

What To Do If Accidentally Eaten?

Now that you know not to give chocolate to chickens, we should talk about first aid. In the case that you accidentally gave your hens some chocolate, you need to know what to do. The first thing you should do is call your vet.

They will ask you some questions like what type of chocolate was it, how much your hen weighs, and how much they ate. With this information, they will decide if you need to bring them in or wait for symptoms at home.

If your vet doesn’t think it is an emergency, you will need to keep watch on your hen for 24 hours. It would be best if you watched for symptoms such as diarrhea, seizures, and low energy. If your hen starts showing any of these signs, you should take your bird to the vet.

You should also provide plenty of freshwater to help flush their systems. But don’t force them to drink if they don’t want to. If, after 24 hours, your chicken seems to be okay, then your chicken is safe.

Other than this, there isn’t much you can do. Chocolate can be very deadly, and the symptoms come on quickly. There isn’t anything you can do to make them throw up or flush them quickly.

And even if they are okay the first time they eat it, it’s not guaranteed that they won’t develop heart conditions later. Chocolate is one of those foods that you should avoid at all costs.

Are There Any Baked Goods That Chickens Can Have?

Most baked goods are high in sugar, which causes obesity in chickens. And since chickens can’t taste sweets, it isn’t doing them any favors by feeding it to them.

Instead, you can give your flock any assortment of fruits and vegetables as a delicious snack to share. And if you really want to provide them with a great snack, you can buy some crickets or mealworms. But you might want to bring your own snack there.

Can chickens eat chocolate? While chocolate is a special treat for humans, but you should never give it to animals. Though your chickens might be okay after eating a small amount of chocolate, it shouldn’t be apart of their regular diets.

And there is no guarantee that they will be alright every time you give it to them. Instead, opt for fresh herbs, eggs, or even whole grains and oats. These treats are so much more appreciated with your flock.