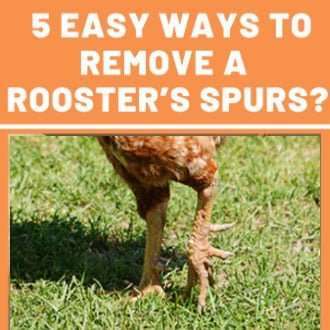 Removing rooster’s spurs is one of the most challenging tasks among chicken keepers. If you have a few chickens and one or two roosters, then you should be aware of long spurs growing on their legs. And the good news is that they can be trimmed when they grow longer. What are the 5 easy ways to remove rooster spurs? You can remove spurs from your rooster’s leg by trimming, filing, clipping, removing the keratin and preventing the growth of spurs when the rooster is still young (a chick). Removing your rooster’s spurs is a noble idea such that it will keep your hens, your rooster and you safe.

Rooster spurs are a common thing that occurs naturally when your rooster is growing. If you have a rooster, look carefully inside of his legs. You will most likely see a pointy, bony-looking feature growing from the legs. The spurs grow on the inner legs, slightly one or two inches from the claw. If you observe your chicks routinely, you may see spurs growing starting from three months onwards. But most roosters will have noticeable spurs at the age of eight months.

Why Should You Remove Rooster Spurs

Spurs are used by roosters for defense in case of an attack. Often times roosters would use their spurs to defend themselves or defend their hens against predators or other intruders. But this feature can pose some threats to other chickens as well. Most rooters are known to be notoriously aggressive and the only way of taming them is by removing their spurs.

There are different ways you can remove spurs from your rooter’s legs. All these processes are divided into two major groups; permanent and temporary removal. When you opt for the permanent method, look for an experienced veterinarian to perform this task.

Spurs on roosters have leg bones in them, so you need to be extremely careful when removing them. Any slight mistake can damage your rooster’s leg bone permanently. With temporary methods, you won’t need to hire a professional. Instead, you can perform this task on your own. Below are five easy ways to remove spurs from your rooster’s legs.

1. Trimming the Rooster Spurs When Roosters are Still Young

When chicks are already hatched, you will be able to see spur buds on their legs. As such, you may stop the growth of spurs by cauterizing visible spur buds. This way, you will have prevented their growth (spurs) even if the chicks grow to become adult chickens.

As stated earlier, you should be careful not to injure the leg bones of your chicks during the removal process. On the other hand, the spurs might grow if you fail to cauterize enough of the buds.

When partially cauterized, the spurs do not become painful but may become misshapen spurs when they grow. You may consult with your local veterinarian to show you how to go about this simple procedure. Otherwise removing spurs from the chicks’ legs is a fairly timeless and cost-effective method that you can use to prevent spur growth.

Surgical removal of spurs applies to adult roosters with abnormal spurs. You can also use this procedure to get rid of unwanted spurs from your rooster’s legs. This is when the services of a veterinarian come into play.

This procedure requires your rooster to be asleep throughout and the vet will most likely help you with putting it to sleep. The vet will use a bone saw to get rid of the rooster’s spurs including the underlying bones. Once the cutting is over, the skin on the affected leg will be stitched to let the wound heal properly. In most cases, the wound left might become infected if not taken care of as required.

Filing rooster spurs is one of the easiest ways of removing these features from the legs of your rooster. The procedure requires you to use a file or Dremel with an attached file. Any of these two tools will make this exercise possible if you know what is supposed to be done.

Using a Dremel tool or metal file, you can file your rooster’s spurs starting from the tip going down towards the bony growth. As you file, you must be extremely careful especially when approaching the rooster’s bony growth under the keratin.

During the filing process ensure that your rooster is wrapped in a piece of cloth or towel with one leg exposed. This is done to prevent your chicken from freaking out and interfering with the procedure.

In case you notice that the rooster is becoming restless, you should cover his entire face including the eyes. As you file the spurs, ensure that the tips are rounded and made smooth for your safety and that of other chickens as well. Filing method is a simple, affordable and effective way of removing rooster’s spurs for safety reasons.

Clipping rooster’s spurs is another easy way of despuring. This method is fast and effective especially when it comes to the removal of the longer portion of your rooster’s spurs. Just like the filing method, you need to be cautious enough not to cut deeper into the section of the spur that consists of bones and blood vessels.

Before you get started with this procedure, you must ensure that your rooster is wrapped in a piece of cloth or towel to stop it from freaking out. You can also cover the eyes or the entire face to keep the rooster calm during the clipping process.

In this case, you will require guillotine-style clippers to help you clip a section of the spur you want to get rid of. Now that you are clipping your rooster’s spurs, you will notice some sharp points. Therefore, you should sharpen off these points using the back of the clippers to make the clipped area safe.

Also, ensure that you have some amount of cornstarch or blood stopping powder ready in case you accidentally injure your rooster during the clipping process. But never attempt to apply the painkilling ointment to the injured part on your rooster because it is highly toxic, thus harmful to your chicken.

You may pop a section of keratin off of your rooster’s bone growth in a bid to remove the spurs. This is also another easy way of removing rooster’s spurs when you feel that they have overgrown.

The process involves pulling off the entire keratin sheath for your safety and that of your chickens. What you will require for this procedure yo be successful is a pair of pliers, oil or hot potato.

You may use a pair of pliers to cut off the spurs. This method is actually the easiest. It takes little time with no cases of injuring your rooster. But what is the work of hot potato or oil? Oil and hot potato can soften the keratin making it easier to pop it off.

How To Handle Your Roosters When Despuring them

The first process involves catching your rooster in readiness for despuring him. Use care when a rooster becomes aggressive. So, it’s advisable to approach your rooster from behind and catch it from above using both hands. This will help you secure his wings and avoid causing harm to him.

Once you have your rooster in your hands, the next step is to cover him using a towel to minimize some movements. Not all roosters are aggressive. Some of them are gentle and won’t fight back when you try to hold them. But you should always apply safety measures so that both you and your rooster remain safe during the entire process of despuring.

How to Stop Bleeding When Despuring

Bleeding can occur regardless of the method you use to remove spurs from your roosters. The spur stumps will not bleed very much. The best way to stop bleeding is to apply cornstarch or blood stop powder over the wound before spraying the affected area with an antiseptic poultry spray.

How long will your rooster take to recover after removing the spurs?

It should not take too long for your rooster to recover. In fact, the healing should take at least one or two days for the remaining section of the spur bone to heal.

Why do roosters develop spurs?

Roosters have spurs for two major reasons. One of the reasons is that this feature enables them to defend themselves against any threat coming their way. Secondly, roosters use their spurs when mating.

Even though the rooster’s spurs are part of their growth and development, these features need to be removed for safety reasons. So, you may apply methods such as clipping, chopping the keratin, trimming, filing and surgical procedure to remove spurs from your rooster’s legs.

Why Should I Clip My Free Range Chickens’ Wings?

Why Should I Clip My Free Range Chickens’ Wings?